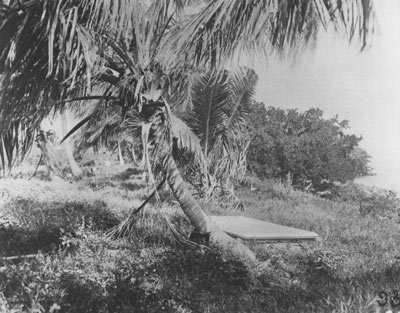 Housman and his wife survived the Seminole attack of 1840 by seeking refuge on the cutter Medium anchored at Tea Table Key. Losing most everything in the attack, he packed up his wife and slaves and sailed for Key West where his belongings were auctioned off. Housman settled in Key West for a short time and found work as a wrecker. April 30, 1841 Housman vessel Key West collided with the Leander. He was reported dead the following day. It is said he was crushed between the hulls of two ships as he attempted to maneuver from one ship to another during squally weather. Housman’s wife had a large headstone engraved and placed on Indian Key. “Here lieth the body of Captain Jacob Housman, formerly of Staten Island, State of New York, Proprietor of this island, who died by accident May 1, 1842, aged 41 years and 11 months. To his friends he was sincere, to his enemies he was kind, to all men faithful. This monument is erected by his most disconsolate though affectionate wife, Elizabeth Ann Housman. Sic Transit Gloria Mundi (the glory of the world is passing).”