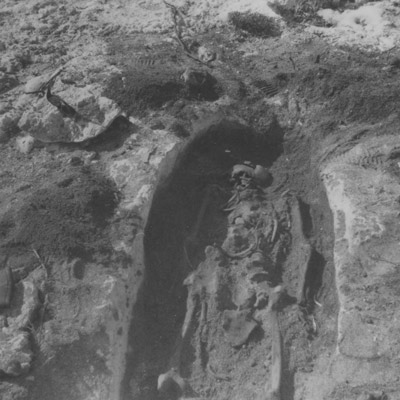 “Dear Charlotte and Russ—The time is again fast approaching for our return to the Keys. Suspect it will be around the first of March. Thank God!! Awhile ago you mentioned you have the address of some Housman relatives that visited with you on Lignum Vitae Key. Would appreciate having it—Can do?? Regards—Rudy.”

Charlotte wrote: “Dear Fran and Rudy—Just a note because we (were) unable to give Housman’s relatives any good information we did not get their address. Recently Terry Starck of Islamorada found the true grave of Housman. Carved out on edge of island: part of skull showing after Betsy uncovered skeleton and name plate Housman. Covered it again some and when he returned with camera—some slob had taken all of skeleton except teeth. He said he would answer a letter from you and would send you a snapshot of the grave if you wrote him.”

Terry Starck, dated May 30, 1966 , wrote: “Dear Mr. Atmus: Please accept my apologies for having waited so long to answer your letter. I had taken a picture of the grave I found on Indian Key and was waiting to finish the roll and send the picture to you. As you can see, I don’t take too many pictures.

First of all, let me clear up a misunderstanding: the grave I found was not marked in any way; it was however, located about fifty feet from where the marker for Capt. Housman’s grave had lain. This marker was removed in 1952 and is now in the custody of the Historical Association of Southern Florida, 2010 North Bayshore Drive Miami. I believe it is on display in their museum there. (This information is contained, along with a short article about Capt. Housman, in the pamphlet I enclose They All Called It Tropical.

On page 49 in the pamphlet is a map of Indian Key, and I have marked the approximate location of the grave. I found the grave as I was walking along the shore and happened to see what seemed to be the part of a human skull lying on the ground. My wife and (I) ‘excavated’ it with our hands, being careful not to displace anything. The skeleton was complete but appeared to be somewhat disarranged (One of the legs was out of place, for instance.). There were fragments of what appeared to be wood and some metal pieces in the grave, but the skeleton was the only identifiable item.

The skeleton was only two or three inches beneath the surface. We did not move any of the bones, except the piece of the skull which we had originally seen above the ground. When we left, we replaced as much of the dirt as possible.

I did not get a chance to return for several weeks, and sometime in that interval the grave had been re-excavated and all the skeleton removed. There were several teeth left, which I took. However, that day I was caught in a severe squall, and in trying to get my boat back home, I ripped the pocket containing the teeth and they fell into the water. Therefore, I am sorry to say, nothing remains of the skeleton, unless the people who dug it up the second time have saved it.

Since we are not positive at all this is Housman’s grave (it seems likely, since the skeleton was so close to the place where the original marker was found.), I am afraid I am not much help. The only concrete information is the picture of the grave site (also enclosed) which I took on my return trip.”